Deserts, expanses – wild land! These are the clichés of one of the most interesting regions in Africa. Namibia is a natural paradise, a dream for everyone with wanderlust. The coast of the Atlantic measures exactly 1,572 kilometers, but a cold sea current usually stands in the way of bathing fun. Three beautiful animals adorn the country’s coat of arms – an osprey and two oryx antelopes and those who travel to Namibia with open eyes are very willing to be fascinated by the grandiose nature with all its facets.

The oldest desert in the world, the life-threatening infinity of the Skeleton Coast and the majesty of the elephants in the worth seeing Etosha National Park are not opposites in southwest Africa. For many tourists, the German heritage is both fascinating and irritating at the same time. In cities like Swakopmund, for example, there are still various signs and shops in German. The country is perfect for road trips and round trips.

In the following we present you the most exciting tours, most beautiful attractions and best sights in Namibia. 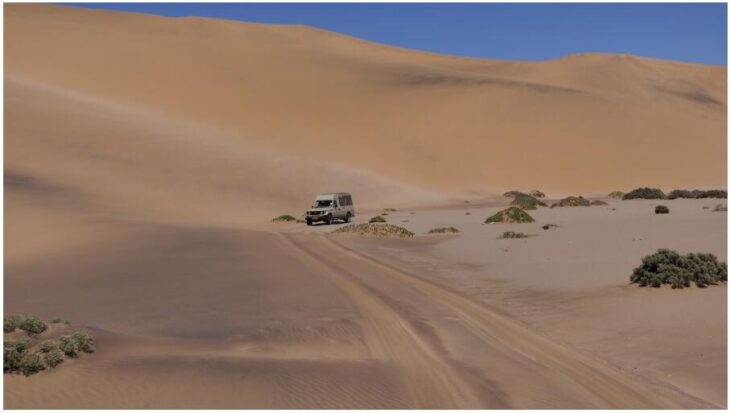 The Namib gave this country its name – it is the oldest desert in the world. As early as 1907, the administration of the German colonizers declared the region between Swakopmund and the Kuiseb River a nature reserve. The then still modest beginnings eventually turned into an area the size of Switzerland. Today the Namib Naukluft Park is the largest wildlife park in Africa and the fourth largest in the world. Imposingly framed by the up to 2000 meter high Naukluft Mountains.

Namib means “open space” in the language of the indigenous people, and anyone who crosses the desert on the gravel roads by car will soon feel that this “open space” is full of wonders. The Namib is home to jackals, antelopes, hyenas, zebras and of course snakes. They have all adapted to the circumstances over the course of many centuries. Hikes between the red rocks of the park are unique experiences.

The up to 350 meter high dunes of the Sossusvlei are the optical highlights of the Namib Naukluft Park. The winds from the Atlantic Ocean have created the sandy giants that are at the top of Namibia’s sights. “Sossus” is borrowed from the Nama language and means something like “blind river”. This is to be taken literally, because every few years the Tsauchab river silts up in the dunes that separate the park from the cold sea.

On the way to Sossusvlei, which resembles an amphitheater, he created the one kilometer long Sesriem Canyon. And where all paths ended for him, there is now a clay pan that has been christened “Deadvlei” and which is decorated with the remains of their former acacias. It is a place of indescribable beauty and uniqueness. One of the highlights is climbing a large dune like Big Daddy or Dune 45 – but a certain amount of endurance is urgently required!

German is spoken in Swakopmund, because in this city on the Atlantic Ocean many “southwestern” have found their home to this day. They are the descendants of those German settlers who more than a hundred years ago hoped to find happiness there in what was then South West Africa. Just a few years ago, the main street in Swakopmund was named after Kaiser Wilhelm; today it bears the name of the former Namibian President Sam Nujoma.

Several houses in “Swakop” have been preserved from colonial times: the old post office, the Woermann house with the Damara tower, the Hohenzollern house, the lighthouse and, last but not least, the iron jetty that protrudes into the Atlantic and once served as the port’s pier. On a tour to the long silted up Sandwich Harbor, the visitor passes Walvis Bay, Namibia’s only deep-sea port. The legendary navigator Bartolomeu Dias anchored nearby on December 8, 1487.

In the large Etosha National Park, the authorities are actually not stingy with numbers. They let visitors know that there are 16 different zones of vegetation and that this is home to 114 mammals and over three hundred species of birds. But there is one thing they keep silent about for good reason: the number of black rhinos that live there. What is known is that Etosha Park boasts the largest population of rhinos hunted by poachers.

If you drive through the park on the edge of the huge salt pan in a private car or accompanied by rangers, you will feel very close to the Garden of Eden or Noah’s Ark. With a bit of luck, visitors will come across the “Big Five”, ie lions, buffalos, rhinos, leopards and elephants. You can also stay in state camps within the park and watch the parade of thirsty wild animals at the illuminated Okaukuejo waterhole at night.

In 1947 a farmer roamed the Damara Mountains, west of the small town of Khorixas, in search of suitable territory for his goats. Although he found a source, he expressed doubts as to whether it would be sufficient for settlement here. This is how the name “Twyfelfontein” came about and today it is the epitome of an unbelievably high number of rock carvings.

Presumably it was the San, a people of hunter-gatherers, who carved these little works of art into the red rocks several thousand years ago. They show giraffes, lions, antelopes and zebras in 2500 pictures. Twyfelfontein has been included in the UNESCO World Heritage List. 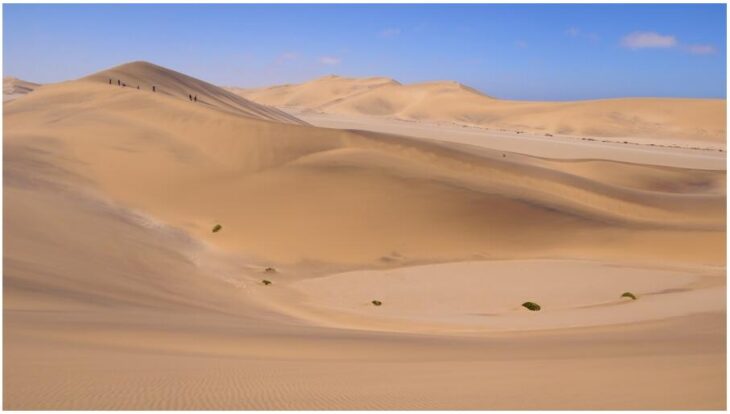 Originally this place, now blown by the sand and long abandoned, was supposed to be a jewel in the desert. Today in Kolmanskop, not far from the port city of Lüderitz, only memories of the glorious days of diamond discoveries in Namibia are cherished. Because the place has degenerated into a kind of “ghost town”. In December 1908, the German authorities declared a zone north of the Orange River a restricted area. This has not changed until today, because valuable rock is still being searched for there. And if you want to enter the forbidden zone, you have to register.

This also applies to Kolmanskop, where the wind whistles through the windows of those houses where champagne once flowed freely in golden times. In the small museum, the history of the abandoned city is told with pictures and on boards. However, if you go from house to house through the sand, you should watch out for snakes. The neighboring Lüderitz, which owes its name to a Bremen merchant, has an interesting history. This city, too, with its famous rock church, runs the risk that inexorable nature will bring back the once magnificent location on the Atlantic.

The Fish River Canyon is undoubtedly one of the most beautiful sights in Namibia. It is the largest canyon in Africa, depending on the calculation, the second or third largest canyon in the world. Here the river water has dug its way up to 550 meters deep into the rock over a distance of 160 kilometers. The eponymous fish river is the longest river in Namibia. It’s a setting that will take your breath away when, for example, you look down at the edge of the abyss.

The Fish River Canyon Hiking Trail is one of the most popular hiking trails in all of southern Africa. It leads through a rugged landscape and requires a good level of fitness. There is no real accommodation right in the canyon – you always stay in the open air. However, there are two state camps in Hobas at the northern end and in ǀAi-ǀAis near the hot springs in the south of the canyon. In the African winter, guided trekking tours are offered by the camps.

An extraordinary table mountain rises in the north of Namibia – the Waterberg Plateau. It is around fifty kilometers long and 16 kilometers wide and with its reddened rock walls protrudes two hundred meters from the grassland of a plain. In 1972 the plateau was placed under nature protection and is home to numerous endangered animals such as black antelopes, white and black rhinos and buffalo.

To this day, the Waterberg Plateau is one of the most important sights in Namibia and should not be missing on any major tour. It is a fascinating mountain world that you can hike individually or in the company of experienced rangers. The Waterberg, which was historically called Omuverumue, gained sad fame through the battle of the Waterberg in the context of a Herero uprising in August 1904.

In addition to endless deserts such as the Namib and Kalahari, Namibia also has a tropical paradise – the Caprivi Strip. It is the product of the colonial era and the Heligoland-Sansibar Treaty, with which the German Empire wanted to secure access to East Africa. Between Angola and Botswana, this is a wild and water-rich area with countless elephants, lions and many hippos. The Caprivi Strip forms the northeastern end of Namibia.

Due to the expansion of the national road B8, the Caprivi tip has become increasingly important for tourism and is now one of the most important sights in Namibia. At the same time, the indigenous people, the Itengese people, are trying to make the region independent from Namibia and to declare it an independent free state. In addition to some lodges and camps, luxury safari houseboats such as the ships “Zambezi Queen” and “Chobe Princess” also operate in the Caprivi Strip on the famous Zambezi River.

The term Skeleton Coast refers to the northern section of the Namibian sea coast and the adjacent areas of the hinterland. The region begins a little above Swakopmund and extends up to Kunene on the border with the neighboring state of Angola. The Skeleton Coast is part of the Namib and yet unique in many ways. The park is divided into two areas:

As far as Torra Bay, the area is freely accessible with a corresponding permit, above it from Torry Bay to Kunene, entrances are only possible as part of guided tours with licensed safari providers. At first glance, this extraordinary Namibian sight appears hostile to life, but many species have adapted to the harsh conditions. With a bit of luck you will meet the seals at Cape Cross and even desert elephants, lions, rhinos, brown hyenas and giraffes. 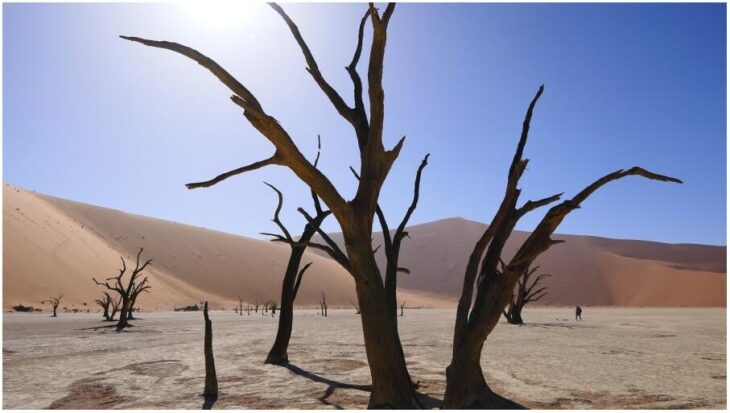